The unique look of the Lykoi causes reactions of amazement and excitement whenever people first see them. They are the only cat breed that has the shocking appearance that has become so popular with cat enthusiasts. Most people agree that they look like little wolf cats – hence the name Lykoi is a play off the word Greek word Lycos meaning wolf. Their strong prey drive is apparent when they play. Lykoi will stalk their toys, other pets, and even people before they pounce. The Lykoi are very loyal and tend to bond well with people. When new situations arise, the Lykoi are cautious at first to survey the situation. Then, they quickly warm up to new people and new pets. When they look at you, their eyes seem to stare through you, almost like they are reading your mind. In the end, they are still sweet, loving cats that just want to warm your heart.

The Lykoi is a naturally occurring gene in the feral cat population. The Lykoi breed was founded in 2011 by Johnny Gobble, Brittney Gobble, and Patti Thomas when two unrelated litters of kittens were presented to the founders as unique cats. The Gobbles did careful health evaluations to ensure that the cat’s unusual appearance was not caused by sickness or disease. To prove it was a gene, Johnny Gobble bred two of the unrelated cats to produce the first intentionally bred Lykoi. Since the mother to one litter was a black domestic, extensive outcrossing with shorthair black domestic cats began. With time, it was determined that the gene was recessive, and to continue to reduce genetic inbreeding, more outcrossing with the black domestic cats was done. There are still Lykoi cats born to the feral cat population, and sometimes they can be used in the breeding program. Once Championship status is reached, there should be enough outcrossing to ensure that inbreeding is minimal. 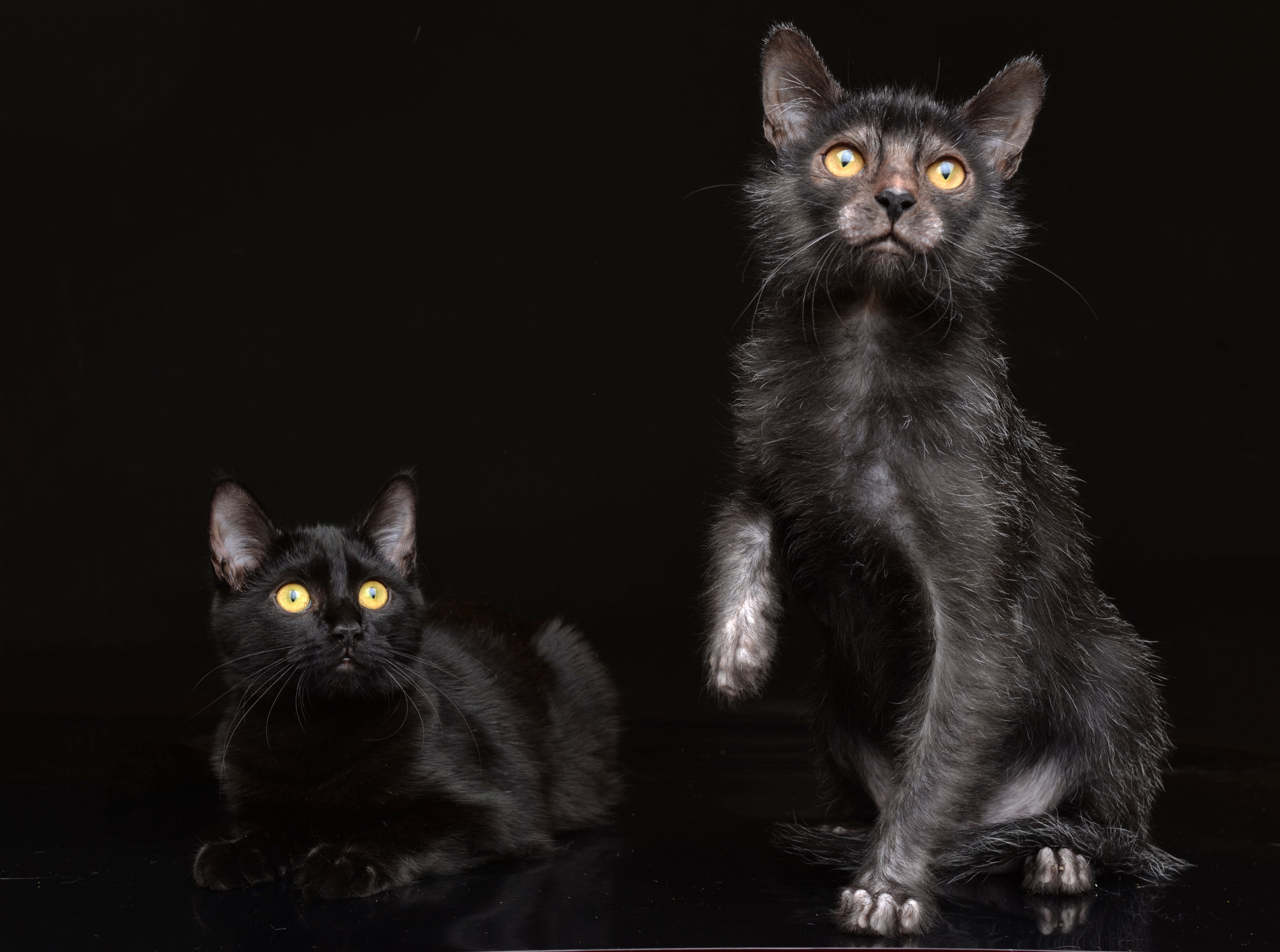 The Lykoi is a very intelligent cat. They are great problem solvers and it shows when they play. They like to be with people, but can find satisfaction playing alone with any toy or object in the room. When there is more than one Lykoi, they interact very well. Lykoi sometimes appear to have dog like attributes because they will fetch, hunt, and chase as a wolf would on the hunt. The Lykoi love a warm lap, but prefer to be actively playing and searching with their limitless supply of energy. As with other cats, they love the sun and search for it. They are protective of their people and toys, but will share when asked. They are cautious with any new pet or person at first. They want to watch to ensure they are not a threat to them or to the home. Once they are assured that the new people or pets are safe, they will quickly warm up to them. Because of their strong prey drive, intelligence, and protective nature, people say the werewolf look also defines their personality.

The Lykoi is a partially hairless breed of cat with a color that is unique to them. The hair coat is a combination of solid white hair and solid black hair. The mix of hair can vary from being almost black to almost white. The more white hair there is in the coat, the more silver the Lykoi will look. The coat pattern is called roan in other animals, but in cats, it only exists in the Lykoi. The partial hairlessness can also vary. They can be almost completely hairless to almost completely haired, and they will moult most of their coat at least once. They will always have no hair around the eyes, chin, nose, muzzle, and the back of the ears. The ears and nose will also feel like leather. The hairless face gives the Lykoi that werewolf look that everyone knows and loves. They will have sparse hair on their legs and feet in almost all instances. The Lykoi skin is pink, but with sunlight it can darken to black in a few days. If the sunlight is scarce, their skin will return to pink. They are a medium cat with the males significantly larger than the females. The ears have a wide base, and they are tall and pointed. Their body is not bulky, but lean. They have tails shorter than their body and medium legs. Their traits give them the appearance of a wolf. They are born solid black, and in two to four weeks, the hairlessness and color pattern emerges. Despite the two different colors in their coats, they are shown as solid black cats in the traditional division.